Our child entered into toddlerhood as a full blown foodie. Do they all? Maybe. What I do know, as mother to my one, is that she began eating solid foods with a voracious appetite and without any obvious issues. She was all over avocados, peas, and pears by 10 months, downing cucumber/avocado sushi rolls at age one, and eating grilled chicken off of the drumstick at 17 months.

Yep, it was smooth sailing once we moved into solid foods.

Then came the first rash, which appeared on her upper right thigh at 18 months. We racked our brains. Was it a new food she ate or soap we bathed her with? She’d had shellfish, meats, fruits, and veggies before this, so we weren’t confident that it was food related. Google told me that rashes appear in children of her age for both specific and unexplained reasons. The bumps were raised and small, but not filled with fluid or red. Dr. Sears said if the child seemed happy and not bothered, then all should be okay and that the rash would eventually, after a matter of weeks, go away on its own. Which it did, eventually. Maybe the Aquaphor or anti-fungal cream accelerated the process, maybe not.

About 5 months later, a new rash developed. This one was on her face – on her cheeks, primarily. At first, just a few spots were scattered across each cheek. It was January 2017, which was a cool and wet month in San Diego. Perhaps the weather had triggered it, we reasoned. But then there was the day we dropped her at Grandma’s for a few hours so that we could go to brunch. When we returned to her, the spots had grown more red and it seemed that there were more. At that point came a question that we, as parents, frequently began asking aloud: “What did she eat?” On that particular day, Grandma had made a brunch spread of her own – eggs, bacon, pancakes, fruit, and juice. It was hard to know what the catalyst in making the rash worse might have been.

We went with strawberries or apple juice as the likely culprit. And so we eliminated both and began experimenting with coconut oil, Aquaphor, and anti-fungal cream to reduce the flare up. It seemed to work. Sort of. At her two year pediatrician visit, it was a topic of discussion that didn’t lead to much concern since the rash had largely faded by that time. We couldn’t think of any newly introduced foods that might be triggers, aside from the ones we were avoiding, so an allergy test wasn’t recommended. There may have been other factors at play. When symptoms resurfaced noticeably a couple of months later, the pediatrician had some new ideas on what the cause might be.

With the nature and appearance of the rash on her face, the pediatrician prescribed a steroid-free eczema medication. We gave it a try. There was not an overwhelming improvement. In fact, small bumps began to appear on her upper cheekbone and even closer to her forehead. The pediatrician then began to suspect impetigo. We tried a prescribed antibiotic cream for that. Again, with minimal improvement.

It didn’t click for us until a night when her father made a fried rice for dinner. Shortly after the meal, her spots became redder and more pronounced. It was then that we knew the trigger, though we weren’t sure why what started out as a food that she frequently ate and enjoyed without issue had become such a problem: Egg. 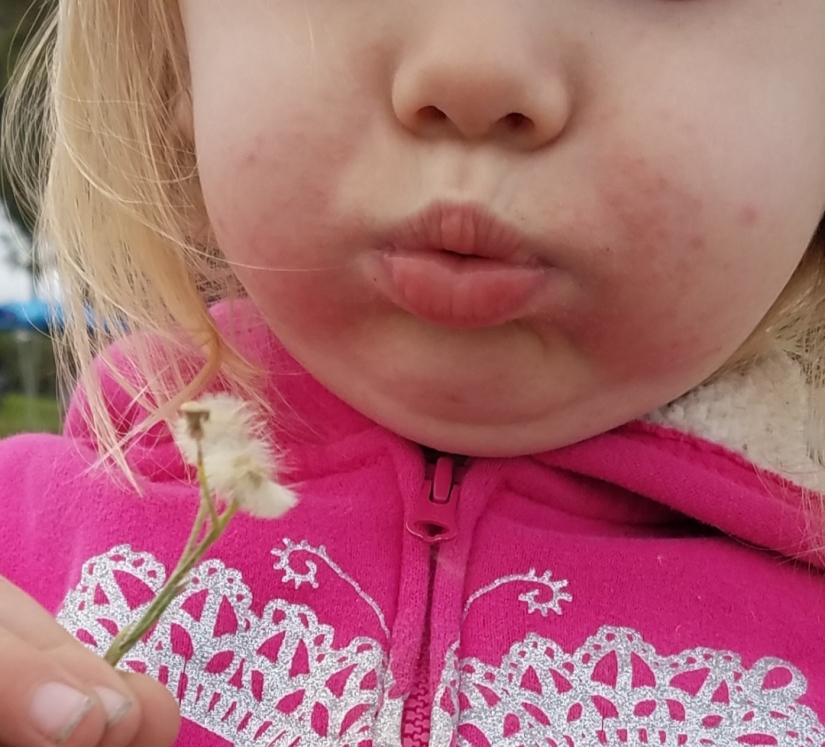 The following months brought a series of changes for us. We truly came to realize just how many everyday food items can include egg, or “may be processed in a facility with egg.” So on came a newly adopted process of pausing to read ingredients more carefully on packages, making smarter eating choices, and asking more questions in restaurants.

When we began our own research on this suspected allergy, we learned that egg related allergies are one of the most common for toddlers. The odds that she’ll outgrow her symptoms by adolescence is promising. She’s fortunate to only exhibit the most common symptom – the skin rash – vs. stomach cramping, congestion, vomiting, or anaphylactic shock.

At her 3 year pediatric check up, we shared our findings with the doctor. As the rash is localized primarily to the face when it occurs, the pediatrician advised that the allergic reaction was topical in nature – ie. egg products touching hands and then touching face and mouth – vs. something that could readily be detected with a blood analysis allergy test or skin test. While these tests were still offered for the purpose of ruling other things out/ peace of mind, we were told that they weren’t likely to generate results based on what we’d described.

So we move forward. We think of breakfast options that don’t involve her former staple. We make sure the pasta we make doesn’t contain egg. We make cookies and muffins with egg substitutes. We ask whether that birthday cake made by a friend’s mom contains egg. We bring options with us always, just in case.

We have started to allow small portions of food containing egg into her diet (pasta, the occasional “normal” cookie, etc). We gauge the severity of the skin reaction that does or does not ensue after consumption. And then we wait a while before we offer another meal containing that ingredient. Hopefully, we will be able to incorporate egg more freely with time. For now, I’m thankful that my daughter understands her situation and is such a great sport about it (thanks, Daniel Tiger for that peach allergy episode!).

View all posts by nicoletteliebermann